Laying on the tire – Hard belt spanking of Nikita 19 y.o. in the factory

Young sailor Nikita is in trouble again. He’s working as a general laborer worker in the tire factory and he was found by his boss smoking the cigarettes during the worktime. The smoking at worktime is prohibited, also cause of fire safety rules in the facotory. The boy was stripped and layed down on a big rubber tire to get a punishment. The punishment doesn’t include the hand spanking , there is only hard belting by the large and heavy Russian Army uniform belt. Nikita is crying during the spanking, because the spanking by the heavy army belt it’s cruel punishment. Strokes of the are falling on Nikita’s sexy young ass, leaving after spanking big bruises on the boy’s ass. 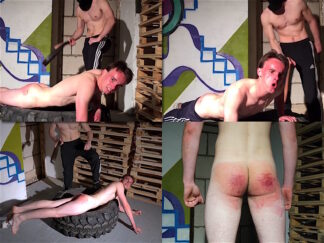