How you know, the gay whipping on the back is a really hard corporal punishment method for lads. During the punishment, the long jailer’s whip stings the defenceless back of young Mark. At the start of the whipping, our young criminal boy is trying no to moan and not cry, but it’s not easy to be calm when you are getting the real back whipping. Mark is trying to be calm during the punishment, but it’s so difficult. The second part of the whipping Mark is suffering in the standing position, holding his hand on metal cells. Surely, on final the Master’s whip makes young lad to moan during the stroking.

This gay whipping video shows you the punishment traditions of the Russian prisons at the beginning of 20th century. At this time the corporal punishments was already popular in some governement institutes such as army or prison. Finally, if you’d like to watch more videos with hard back whipping for guys you can visit the Boys back whipping caterogy of our video store. In conclusion, if you want you can read on Wikipedia more info about different corporal punishment methods for lads. 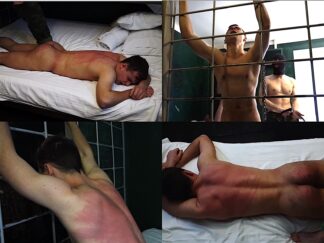