Afanasiy 26 y.o. is a convicted burglar, who was delivered to the police station. To obtain evidence of a crime, the policeman ordered to bring him to the police station dungeon, where usually policeman is torturing defendants. It the torture is taking part the young soldier, who is assisting for the policeman in the back whipping of the burglar. They are using whip and lash to make the burglar confess to crime. One is holding him , the other is whipping his back, then they change positions to give to a defendant to feel the strong stoke first of policeman and the by the soldier. They are whipping him in one time standing beside the bench both sides alternatively whipping the burglar. The guy is stoic, but the strong whipping force him to give testimony, but just after 15 minutes of whipping. 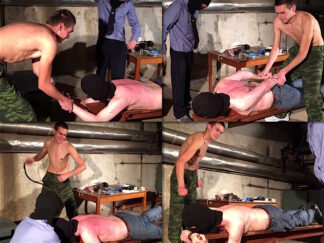