Back whipping on the haylofts for Mitya 24 y.o.

Mitya 24 y.o. is getting whipping on his large muscular back. He’s laying down on the haylofts and suffers, suffers and suffers….Back whipping was popular punishment in Russia in 19th century for serfs, such as a most cruel than the classic ass spanking by the birch or belt. Mitya was never been whipped before and he’s trying to be stoic but he’s crying under the whip. Whip strokes are covering his back by the long red-blue scars and it’s very painful way of punishment, but he has no way and he must suffer it, like suffered the whipping Russian serfs in 19th century. 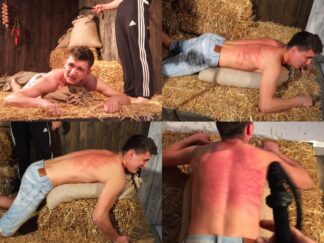