Back whipping for Siberian Ildar 24 y.o.

Ildar 24 y.o. was born in Siberia and he was spanked many times by his dad till 14 y.o. Dad used his large belt, canes and birchs. Now Russian muscular and brutal will get the back whipping by our Master. First in the laying down on the bench position and after that the stnading up position. The steady, sharp strokes of the whip have him breathing hard and trembling involuntarily. His srceams, and fiery red back underline his raw torment. Each swing of Master’s hand, armed by the whip, gives to Siberian guy unbearable pain. That was a really hard whipping, making him to scream. 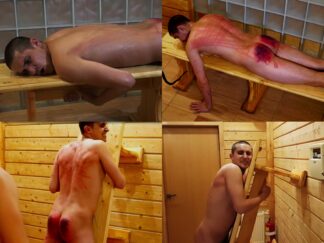