Warning: This is one of the most hardcore sessions of Rus Straight Guys Spanking

Russian sporty plumber Victor 19 y.o. is getting another punishment for being a bad worker. He stripped and layed down on the bench and when Master had seen young and virgine never spanked ass of young plumber in Master’s mind appeared the desire to thrash this ass and make blue-red color by the Russian Army uniform large and cane. First strokes was by the belt and this start became a real hell for young Victor, then he used the cane and the punishment became a craze wave of pain, wave of suffers. Victor asked for a break, but Master don’t want to stop the trashing because Master admires the pains of boy and the bruises which appears on the ass after each stroke. 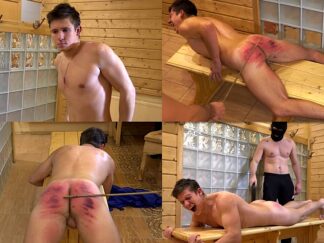 You're viewing: Hardest thrashing by belt and cane for Russian plumber Victor 19 y.o. $23.99
Add to cart