View cart “Endurance test – Hard back whipping for Kostya 20 y.o.” has been added to your cart.

Kostya 20 y.o. is a slim working-class guy and he’s getting now his first back whipping This whipping is a way to test himself, test his ability to endure the pain and to prove himself that he’s a real man. After the cruel belt spanking he’s on the next level of pain – back whipping. His back skin is soft and thin and lot of bruises and scards are appearing on the back. It’s really painful for him, but he has a deal with himself – to prove that he’s a strong man. Master forces him to change positions and to stand in most unconfortable poses to feel not only the pain, but the shame also. Strokes are cruel, but Kostya is trying to be stoic during this punishment. 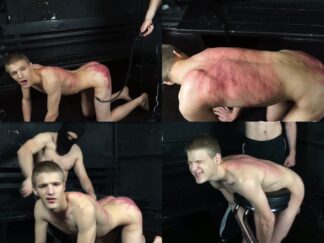