Boy breast whipping Mark 19 is getting in the prison. The judge convicted Mark to jail for hooliganism. After the court police delivered him in the local prison where he must serve time 2 months in jail. Furthermore, presently he should get a decent breast whipping punishment for this. Young boy Mark is bare. He’s bounded to the cell of the prison by the metal chain. It means that he’s in the position that he can’t move. Now jailer enters the prison cell armed with a long whip. Admire the Mark’s breast. How you see, now his breast is ready to get a decent whipping. After some seconds admiring the boy’s bare body the corporal punishment begins. Breast whipping for boy is a hard punishment method. In additiom, each hit of the whip makes Russian boy to a tad groan.

Sure when the whip stings his areolas and it makes more torment for young criminal boy Mark. Furthermore jailer is stroking his ABS and in some cases stings different parts of his body. That’s so interesting to watch a boy getting a breast whipping by the other man. Mark is trying to be calm during the punishment, but it’s so difficult… Boy don’t want to show to jailer that he’s feeling a hard pain. In other words, young prisoner is trying to show that he’s a real man. Sure his cellmate is watching this proccess and in the secont part of punishment he’s holding Mark’s hands stretched to the sides. In this positions that’s impossible to hide the breast from the whipping. Finally, how you can see in the video, each hit of jailer’s whip is falling on the boy’s breast very cruel and makes hard suffers for young criminal guy.

This boy breast whipping video will enable you to feel yourself there, in the jail, in a position of one of our saints. And finally, if you are interested in more boy breast whipping videos with a hard torso whipping punishments you can visit the special Torso whippig area of our website to admire corporal punishments of male’s breasts. In conclusion, you can read some history aboyt prison corporal punishment methods on Wikipedia. 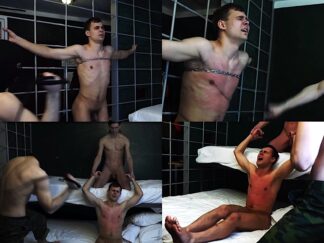